#75 - The Well of Ascension by Brandon Sanderson 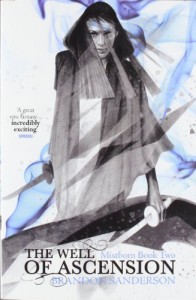 I started the Mistborn trilogy earlier this year and I immediately fell in love with the world Sanderson created. It was also the first book by him that I read. I really wanted to learn more about the storyline and I was not disappointed by this second instalment.

The Well of Ascension is massive, there are more than 700pages and I'm not used to reading such long books. I much prefer smaller books because I don't like spending too much time on the same book. No matter how good it is, I get bored easily. I still really enjoyed reading this.

Vin is an amazing character, I like how she has doubts and flaws. She is probably the most powerful women in the world but she still doubts herself. I love that this aspect of her personality was so much developed. What is even more amazing about Vin is that she loves Elend, but her world does not consist of only him. She cares about herself and she knows she has important things to do (like saving the world or something). What really gets on my nerves in YA books is when female character relies so much on their love interest it is scary, so it was refreshing not to have to read about that. Vin is also one of the most selfless character ever without even knowing it.

As far as the other characters are concerned I still keep mixing them (apart from Sazed who is way more developed in this book). There are new characters as well and Allriane was really intriguing, I can’t wait to learn more about her in the next book.

I had fun reading this book and I definitely recommend this series if you haven’t read it yet. The fact that this book was so long was a problem for me, but the pacing was really well done, it’s just because of my personal tastes.